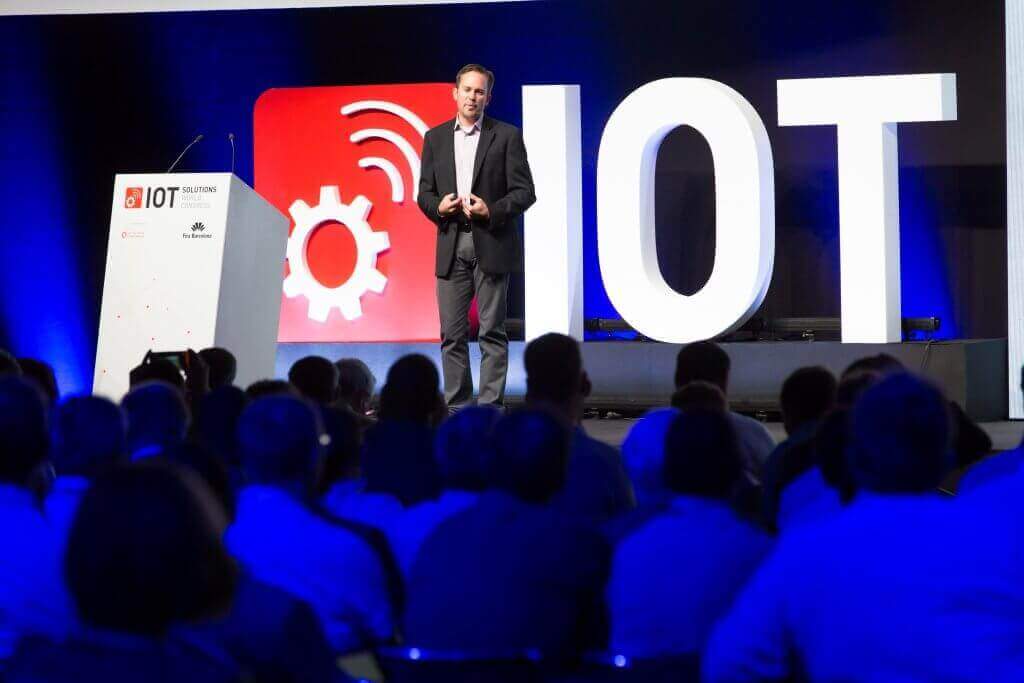 IN OCTOBER, THE EVENT WILL ALSO SHOWCASE THE CONVERGENCE OF IOT WITH ARTIFICIAL INTELLIGENCE AND BLOCKCHAIN

IoT Solutions World Congress (IoTSWC), the world’s largest event on innovations of the industrial internet, is gearing up for its fourth edition from 16 to 18 October in the Gran Via venue of Fira de Barcelona, with the aim of drawing in 300 exhibitors and 250 international speakers. This year’s show is set to confirm the boom of IoT and its wide-scale implementation in a range of industrial and business applications, and will also demonstrate the convergence of this technology with artificial intelligence and blockchain.

Organized by Fira de Barcelona in partnership with the Industrial Internet Consortium (IIC), the IoTSWC expects growth to continue, both in the number of companies and visitors, in parallel with the massive deployment of IoT in a wide range of sectors that have seen great strides made in their efficiency, automation and earnings.

In this respect, the director the IoTSWC, Roger Bou, is convinced that the 2018 edition will prove this technology is here to stay, with its rapidly growing presence in industry: “We can see that IoT is no longer a technological revolution waiting just over the horizon; it is a reality that is being implemented ever more often and has an enormous potential to transform all types of businesses and our day-to-day lives”.

In fact, the Gartner consulting firm has predicted there will be 11.2 billion connected objects in the world in 2018—4.159 billion in industry and specific verticals alone. In other words, an upsurge of 32% in these areas compared to 2017. On the other hand, experts also foresee 2018 to be the year in which IoT makes a real impact in the market, spurring new business and service models.

In such a context of growth, Roger Bou points out the possibilities that the IoTSWC has to offer in terms of business and knowledge, “as it gathers the world’s leading companies in IoT and top experts in the field to explore real applications from the latest innovations and define what trends are setting the pace in the development of the industrial internet“.

The IoTSWC is a benchmark event on the international calendar that is equal parts congress, trade show and testbed, all in the name of promoting top-flight professional networking. The exhibition area will be occupied by leading IoT suppliers represented by their worldwide headquarters, which include IT companies, software platform developers, hardware manufacturers, security firms, telecoms, service operators, industrial automation companies, and many more. It will also feature a testbed area with live demonstrations of the latest industrial internet applications.

As for the Congress, the world’s top experts in this technology and industry reps will be exploring the impact of IoT solutions in a variety of environments. Nine core themes have been established for the 2018 edition as touchstones for the more than 125 scheduled seminars: connected transport, product manufacturing, healthcare, energy and utilities, construction and infrastructure, open industry, enabling technologies, blockchain and artificial intelligence, with these last two having their very own forums.

April is the deadline for those wanting to present their industrial IoT success stories at the Congress. The programme committee will be evaluating the proposals received and selecting the most innovative to be presented to the attendees.

The 2018 IoTSWC will also be paying tribute to the year’s most ground-breaking and influential projects with their IoT Solutions Awards, which are open to companies and entities the world over. Companies interest in submitting their entries will be able to do so from March to September.

The content and scope of the event was defined in large part thanks to the involvement of the Industrial Internet Consortium (IIC), a worldwide organization of over 250 firms and entities related to IoT whose aim is to accelerate the adoption of the industrial internet. The executive director of the IIC, Dr. Richard Soley, underscored the calibre of attendees and demonstrations of live systems of the IoTSWC: “IoT Solutions World Congress continues to be the premiere industrial IoT event every year. It provides attendees with a chance to meet the leaders who have been in the IoT space for years, hear the experts, share success stories from specific companies and industries. It also provides them with an opportunity to see the benefits of the industrial internet in action with our focus on fully functional testbeds.” Soley pointed out that “no single company will win the IoT; however there are best practices that enable companies in each market to work together.” This is what can be found this October at Fira de Barcelona, as well as “best practices that address the challenges faced by IoT in terms of security, data analysis and convergence with artificial intelligence and blockchain.”

At the 2017 edition, the IoTSWC brought in 240 exhibitors and 13,000 visitors from 114 countries, a respective 30% and 60% higher with regard to the previous year. According to the organization’s data, 45% of the companies visiting the IoTSWC in 2017 declared their intention of investing over 1 million euros in IoT in the next 3 years.