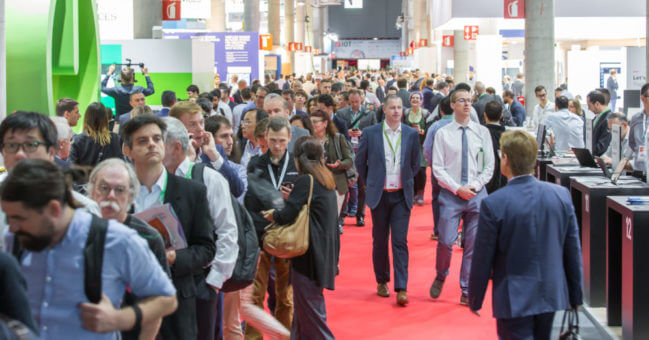 A QUALITATIVE LEAP OF AN EDITION MARKED BY GROWTH IN TERMS OF COMPANIES, EXHIBITION SPACE AND VISITORS

Excellent attendance figures for the third edition of the Internet of Things Solutions World Congress (IOTSWC), underlining the rapid development and economic importance of this technological sector. The event on the industrial applications of the Internet of Things (IoT) concluded today at Fira de Barcelona’s Gran Via exhibition centre as part of Barcelona Industry Week, having brought together 240 companies and 13,000 visitors from 114 countries, representing growth of 30% and 60% respectively compared to last year.

The IoTSWC is organised by Fira de Barcelona in close collaboration with the Industrial Internet Consortium (IIC) – the world’s leading organisation behind the transformation of business and society by accelerating the implementation of the industrial internet in different spheres – and attracts the international head offices of the leading companies in the development of this technology along with the top experts.

The director of the IoTSWC, Roger Bou, expressed his great satisfaction with the results of this edition, which ’consolidates the event as the biggest international platform for business and shared knowledge on the industrial internet.’. Bou also highlighted ’the qualitative leap this year , as with the combination of the trade show and the congress content we have managed to project the huge potential of the IoT solutions market, attracting high calibre buyers from all over the world in different industrial sectors that are either already using the IoT or are looking for customised IoT applications.’

The executive director of the IIC and president of the Advisory Committee of the IoTSWC, Richard M. Soley, confirmed that ‘We’re seeing overwhelming interest in applying IoT technology to industries such as healthcare, financial services, mining, manufacturing & production, agriculture, transportation – you name it. They’re moving at different speeds in terms of implementation, but the companies that are going for this technology are already seeing a return on their investments”.

In this respect, the intensive activity over the three days of the event has translated into overall satisfaction among exhibitors at the IoTSWC, many of which have already booked their space for next year. Indeed, Google and Amazon have already confirmed that they will be taking part as sponsors of the 2018 event.

The congress programme, which featured over 250 speakers, proved extremely popular among the attendees of the more than 125 sessions held, which put an emphasis on presenting practical examples and experiences in the field of IoT applications in areas such as manufacturing; energy and utilities; connected transport; construction and infrastructures; healthcare, and open industry. Also, and for the first time, the IoTSWC included a Blockchain Solutions Forum as well as dedicated seminars on the crypto economy and on investment opportunities in businesses based on this emerging technology that is set to speed up the IoT market, with more than 115 speakers and around twenty exhibitors taking part.

Speakers included such well-known names as the professor of Arts and Media Sciences at the MIT Media Lab, Joe Paradiso; expert in cybersecurity and research head of F-Secure, Mikko Hyppönen; the head of global baggage operations at IATA, Andrew Price; the head of integration of NASA’s Orion Mission Multi-Purpose Crew Vehicle, Carlos García-Galan; the founder of the Bitcoin Foundation, Jon Matonis; and humanoid robot Sophia, who was brought to the show by SingularityNET.

In addition to its highly international character, one of the big differentiating factors of the event was the Testbeds area which proved extremely popular with visitors who were able to watch and experience the IoT in action. This year’s edition showcased eleven innovative projects developed by leading companies: a submersible robot by ABB for inspecting transformers full of oil on oil platforms; an Analog Devices solution for predicting frosts and saving harvests; and a predictive analysis system developed by PTC to eliminate downtime in factories, which also involved the collaboration of Hewlett Packard Enterprise, National Instruments, Osisoft and Flowserve.

Other innovations included connected elevators whose maintenance can be handled remotely thanks to the system developed by Huawei in collaboration with General Electric and Schindler; a Vodafone app developed with Hiruteknova, TST and Rodman for the remote control of the status and operation of boats; a platform designed by Everis to manage drones, associated with SAP; a system tested by IoTworks to monitor cold supply chain logistics; and a completely sensor-based industrial working environment to improve occupational safety, instigated by Wipro with the collaboration of Hewlett Packard Enterprise, IBM and Aruba Networks. The list of projects on display is rounded off with a solution for smart irrigation control and the prevention of river pollution which is being presented by Schneider Electric and Sigfox; a demonstration of how to detect and prevent cyberattacks on an electrical substation, brought along by Kaspersky; and a standard for the control and interconnection of machinery and processes developed by Cisco in which another 17 companies have been involved.

Indeed, this solution by Cisco won the Best Testbed award at this year’s edition of the IoT Solutions Awards, which also recognised Accenture Digital, Intel and AEInnova as the firms with the most innovative IoT projects of the last year.

The fourth edition of the IoTSWC is scheduled to be held at Fira de Barcelona’s Gran Via exhibition centre on 16-18 October 2018.